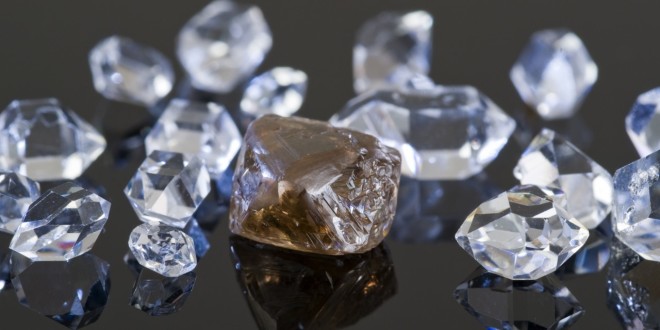 De Beers seems not bothered by the low global market prices for diamonds manufactured in the laboratory, otherwise known as synthetic diamonds, following its announcement that it has considered dealing in that sector.

In an exclusive engagement with this publication, the diamond trading giant revealed that its decision had received government support, the latter of which has had its eyes reverted on beneficiation of the natural diamond industry.

David Johnson of De Beers Group says that inspite of the interest in laboratory diamonds, global demand for natural diamond jewelry in 2017 reached an all-time record of US$82 billion while sales of synthetic diamond jewelry are dwarfed by this scale of demand.

An independent diamond-industry analyst Paul Zimnisky has recently noted that that the price gap between diamonds and laboratory-grown gems has widened by an average of approximately 100% in the past year - doubling from 11-20% a year ago to 28-40% today.

“However, over the same period of time the price of an equivalent natural diamond went from $5,850 to $6,150, representing about a 5% increase. Thus, the discount of the lab-created diamond relative to the natural equivalent was approximately a 17% in March 2017, but is now about 29%, a 71% year-over-year increase," he is quoted as saying.

Why has  De Beers eased its right foot in such an industry to begin with?

Says Johnson, “De Beers carries out a lot of research on issues that are relevant to the diamond sector, and recently carried out research into consumer attitudes regarding synthetic diamond jewelry.”

Another aspect is that consumers don’t see synthetic diamonds as meaningful in the same way as natural diamonds and think they are much better suited to fashion jewelry, he adds.

Resultantly, Johnson says, the group took a decision to launch Lightbox Jewelry, “a line of synthetic diamond jewelry that will retail at very accessible prices that are consistent with the cost of production for synthetics, and that reflect the fashion jewelry positioning of the product.”

“This represents a commercial opportunity to meet the limited consumer demand for synthetic diamond jewelry in the space that consumers tell us they want it (i.e. fashion jewelry, rather than emotionally significant jewellery), but importantly this launch will also help to address the confusion regarding synthetic diamonds,” he says.

He also points that the new line of jewelry will be marketed distinctly as man-made (and, unlike many existing synthetic diamond offerings, will not try to position itself as a direct substitute for natural diamonds).

“It will be priced and positioned in a way that’s different from natural diamonds (because as products of technology that aren’t unique or finite, synthetic diamonds don’t have the enduring value of natural diamonds and it isn’t helpful for the industry as a whole if consumers are led into believing otherwise),” says Johnson.

Euromonitor International in its 2014 article highlighted that the fear is not so much that people will value a synthetic diamond as much as the real thing.

It also posits that diamond producers worry that margins from real diamonds could be eaten into, and that real diamonds may lose their luxury feel due to their cheaper “peers”.

“From a consumer’s point of view, there is fear of purchasing a synthetic diamond for the price of a real diamond, unwittingly, due to the lack of disclosure,” it adds.

Nevertheless, Johnson expects the inclination towards synthetic diamonds to be a positive move for the natural diamond industry.”

Experts have also viewed synthetic diamonds as countering the sale of conflict or blood diamonds.

“It will help consumers understand the differences between synthetics and natural diamonds – in terms of how they are produced and what their long-term value projections are (based on whether or not they are rare and finite) – and this will in turn support consumer understanding of the inherent preciousness of natural diamonds, as well as their ability to represent the key emotions in life because of their uniqueness, rarity and timelessness – all attributes that synthetics cannot offer,” he says.

The group however will not be setting any labs in the country for now.

“For now our focus is on building the new plant in Oregon in the US, as this location provides good value and very secure power provision, which is necessary for the diamond synthesis process, as well as having good availability of the types of technical skills required for the business. It is also beneficial to be in the country that has the world’s highest jewellery demand,” he explains.