Flight TM470: Only one body intact 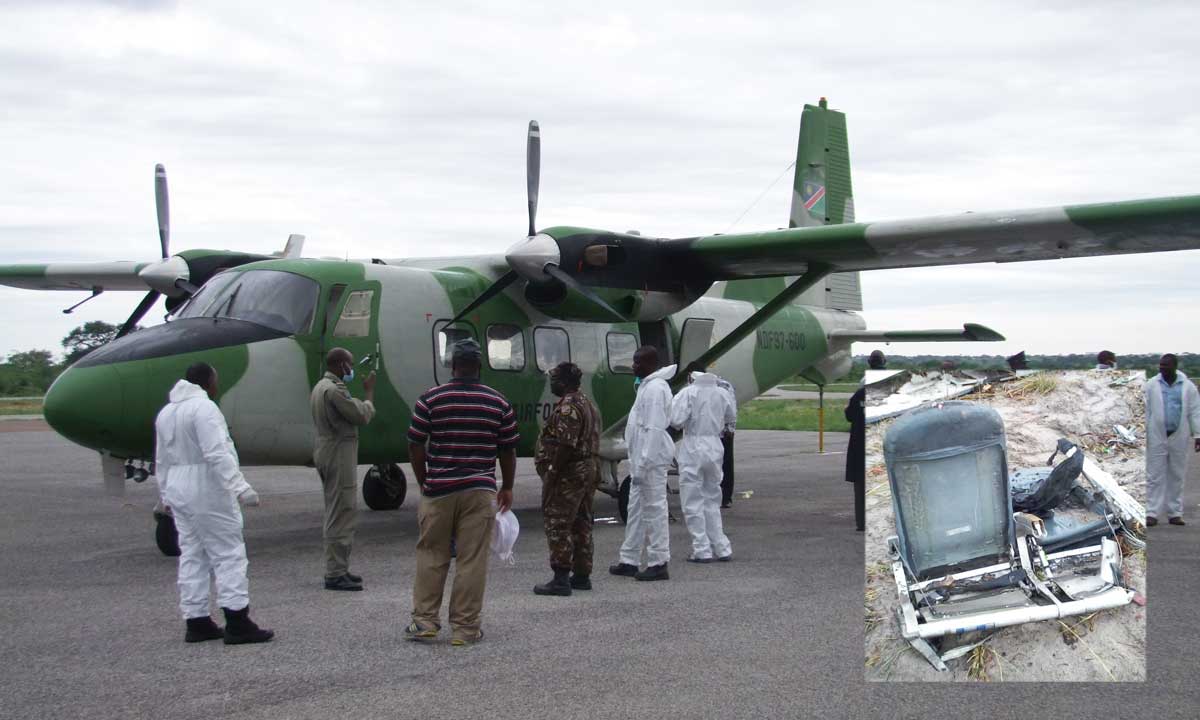 Out of the 34 passengers of the doomed flight, TM470, that crashed into the Bwabwata National Park in the Zambezi Region enroute to Angola, only one body has been recovered intact.
The rest were either dismembered or strewn into pieces of flesh. They were recovered by the Namibia Police (Nampol) at the scene of the accident on Saturday.
This was revealed by the deputy director of aircraft accident investigations, Theo Shilongo, who is also leading the investigation.
The body bags arrived yesterday from 11:20 at Eros Airport where a stench of rottenness engulfed the area.
Some of the bags were still dripping blood, which spilt onto the ground as journalists, diplomats and police looked on.
Present at the airport was the Portuguese representative to Namibia. A local journalist vomited as the stench of the decomposing bodies spread across the small airport.
A group of 50 heavily armed Special Field Force members located the plane in the jungles of Bwabwata, at 9am on Saturday, exactly 24 hours after it had departed from Mozambique.
The search teams were armed because of the marauding lions in the national park.
The flight was reported missing on Friday when it took off from Maputo, at 09h26 GMT on Friday and had been due to land in Luanda, Angola at 13h10.
The plane encountered problems mid-air while still in Botswana’s air-space when the pilot notified authorities on the ground.
However, it disappeared while entering the Namibian airspace and it took Mozambican authorities more than three hours to inform Namibian authorities that the plane was off the radar and missing.
“We were only informed around 15H00 that a plane was missing and assumed to be in our airspace,” Shilongo said.
Emergency search helicopter and patrol troops on the ground were dispatched with focus on finding the survivors and saving them from the wild animals, he said.
The initial search and rescue operation was called off on Friday afternoon due to bad weather but was resumed early Saturday morning after villagers near the national park alerted authorities of the plane debris they had woken up to.
The Brazilian made Embraer A190 was said to have been experiencing poor visibility because of the heavy rain in the region and experts believe the pilot could have resorted to flying low.
Preliminary assumptions reveal the weather (lightning) might have damaged the plane before it even landed, hence Botswana and Mozambican air controllers’ delay in searching for it before sounding a code red to Namibia.
“All that will be discovered from the black box, which is now in the hands of the investigators,” The Villager was informed.
The wreckage will be transported to Rundu airport to be quarantined in a hangar for a complete and detailed investigation, while the remains of the deceased will be transport to their countries from Windhoek.
“There is no plane. There are just pieces of metal scattered around,” said director of aircraft accident investigation in the Ministry of Works and Transport, Ericson Nengola.
According to Nengola, Brazilian investigators are expected at the sight on Wednesday upon-which the black box will be opened.
In 2011, the European Union (EU) banned the Mozambican airliner, LAM, from flying in its airspace.

Top Angolan artist misses Flight TM470
One of Angola’s most celebrated artists, JD, whose songs are a hit in southern Africa, should have been aboard Flight TM470.
JD travelled to Mozambique accompanying fellow artist and rapper, Action Nigga real name, Jose Pascoal Luvuala, who had gone to shoot a music video.
“Instead of boarding the flight, JD decided to attend the Channel O music awards in South Africa. He cancelled his ticket and re-routed it via Johannesburg,” said Angolan journalist, Pedro Teca.
Luvuala proceeded with the Luanda flight and is among the 34 who perished.
The Mozambican Airline (LAM) yesterday listed the nationalities of 27 passengers as ten Mozambicans, nine Angolans, five Portuguese, one French, one Brazilian and one Chinese.
Among the dead is the Angola Inspector General in the Ministry of Finance, Manuel John Landa, who had travelled to Maputo for an Annual Conference of the General Inspections of the Community of Portuguese Language Countries. He was accompanied by two other colleagues from the same ministry.

Embraer A190 questioned
This investigation, which according to Nengola will take months if not years, will open up fresh debates about the A190’s ability to withstand harsh weather.
The Embraer has been known to be economically viable for low income-making air operators but a suspect in turbulence.
news@thevillager.com.na