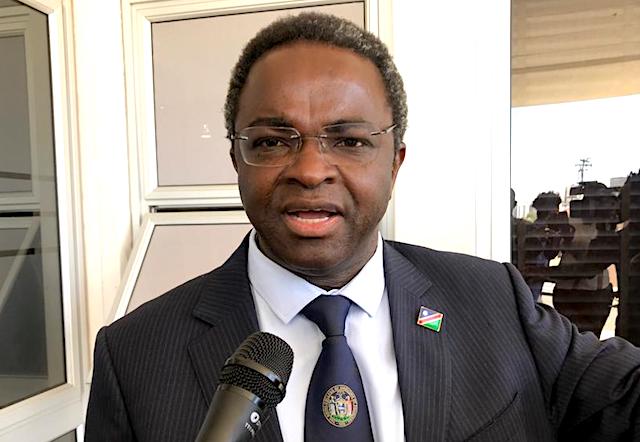 The IPC leader Dr Panduleni Itula denied negotiating with the LPM when he was quizzed by the PDM leader McHenry Venaani last week.

In a letter to Itula dated 22 November 2021, the City of Windhoek Coalition partners - Nudo, PDM and AR - said Itula did not take them into confidence.

The parties said they would not be a party to "any frameworks cooked and discussed elsewhere outside of the signed Coalition Agreement".

The letter signed by the coalition principals - Job Amupanda, Venaani and Joseph Kauandenge - was a response to Itula's letter in which he said the IPC decided that Amupanda should not be retained as mayor.

In his letter dated 22 November 2021 and signed by the IPC national general secretary Christine Esperanza Aochamus, Itula said apart from Amupanda's issue; they had also decided that the post of the chairperson of the management committee should be taken over by a substantive.

LPM leader Bernadus Swartbooi said that his party was finalising a coalition agreement with the IPC regarding the Windhoek municipality.

Last year, the LPM opted out of the coalition agreement, leaving the AR, PDM, and Nudo joining hands.

IPC has four seats in the Windhoek council, LPM has two seats, AR has two, while Nudo and PDM have one each. The Swapo Party has five seats but is also not a coalition partner.

The IPC letter ordered the other coalition partners to suggest the way forward in line with what they had done.

However, two things have angered the other coalition partners who have told Itula that they do not like his dictatorial tendencies.

"We take strong exception to the fact that you denied when quizzed by the Honourable Venaani on why you were negotiating with LPM, individually without the collective principals.

"You denied that you negotiated with them, but Honourable Swartbooi, who is the leader of LPM, made remarks that IPC and LPM had already negotiated a framework document," the coalition partners said.

The coalition partners further said that even when Itula denied it, the truth eventually came out.

According to the coalition partners, they have no principle problem of any sort to work with LPM.

In fact, the coalition partners said, clause 12 of the Coalition Agreement permits such parties to join the Coalition.

Clause 12 states: The Parties may agree, after due consultation with their respective caucus and Party organisation, to invite another political party represented in Council to become a member of the Progressive Forces. Any such party shall first sign this agreement and be bound by its terms as modified by the agreement.

"As you are aware, Clause 12 of the Coalition Agreement has not been satisfied to date, despite your clandestine negotiations outside the framework of the coalition agreement," the Coalition partners said.

Still, the coalition partners said they would not accept the dictatorial tendencies by Itula to make framework agreements without informing them about the content.

The coalition partners also said: "We take with the strong exception the behaviour of IPC in writing a letter purported to principals, but leaked to the media before reaching the intended recipients."

According to the letter, the Coalition said there is a motive by Itula and IPC to discredit the mayor of Windhoek.

The letter further said the partners agreed during a meeting held on 18 November to consult and come back for another meeting on 29 November with feedback regarding the future of the Coalition and the rotational issues in the Council.

"It is, therefore, surprising that before the said meeting has even taken place, you have already pronounced yourself through your secretary-general of the IPC's stance.

"This demonstrates that you do not value collective decision-making processes, and through your actions, you have put the progressive forces into disarray," the letter said.

"We still maintain that we await the proposed meeting on 29 November 2021, as agreed by the Principals, where we must take the final decision on the way forward with regards to the Coalition," they said.