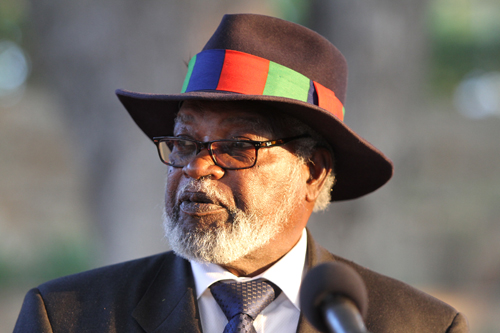 If you doubt this statement, please take a vox-pop down the streets of the country’s main cities or in the poverty-afflicted slums of the nation. It appears as if these unpopular decisions are adopted by uncaring government officials who are mistaken to think that Namibians continue to slumber from the lingering effect of opium germinated by the freedom we have achieved 29 years ago.

The reality is that Namibians are slowly shaking off the effects of this opium to face their daily conditions.

There is no doubt that Sam Nujoma is a national hero and that he will die a national hero with or without these aggrandizing schemes that are plotted by those who want to enrich themselves through his name.

The former president is ailing and does not need more appeasement for his contribution to the struggle, especially when these rewards do not reflect the modesty and morality that goes with the title of a Founding Father. It is on record that he has been reluctant to accept some of the extreme schemes that are designed by Cabinet for him. He must be aware that he cannot be a good Founding Father whose children are eating from the dustbins.

Therefore, cabinet ministers must not exploit his name to justify an ailing system they are creating 15 years after he has left government fully functional at his retirement.

The Former Presidents' Pension and Other Benefits Act was clear in taking care of his personal needs and any other additional benefits ascribed to him beyond this Act are unlawful and are used as pretext to reward future leaders. These incentives will encourage extreme power struggles for the presidency position at the expense of a democratic transition at both government and party levels.

Although it is this government’ strategy to first test public opinion with unpopular announcements and then remain silent for a while and then forced them into our throats, I have decided to use the same title for this opinion piece hoping that the public is also watching.

A critical snapshot at these unpopular decisions shows the lack of respect and care that our leaders have for the citizens of this country who they regard as “voting cattle” during elections. The power and influence at their disposal have blinded them to the plights and rights of the impoverished citizens.

But they also ignore the fact that despite being helpless and hopeless to put an end to corruption, the citizens are aware that we are sitting on a time-bomb that will explode in our life-time to disturb the peace and stability of this country.

The politicians continue to lie that this time-bomb will explode because of tribalism. This is not true, because tribalism in Namibia has no place in our slums where the majority of people live. The incentive for this time-bomb is poverty and corruption.

Many top civil servants have overstayed and in the process grown into little demigods who are intoxicated with power to influence or justify corruptive practices in government. It is hard under the current power regime to understand who is calling the shots because the announcement of major policy shifts or decisions is done by all and sundry.

It is hard to know if some of these pronouncements are official Cabinet decisions or personal decisions by highly placed officials of Government. It is time that these official pronouncements are attributable to State President who heads or if not, to Parliament that must debate the shift in public policies or legislations.

As an example, a legislation that was initially adopted to reward the Founding President because of his exceptional contribution to the struggle in the absence of a legislation to limit his term of office is now changed at will to cater for all the Presidents and their Vice-Presidents. Since there is now legislation in place that limits the Presidents’ terms of office, the incentive policy is no longer required for them to retire as a means of sustaining democratic transfer of power. The fundamental questions are the following:

· How is it possible that Presidents and Vice-Presidents cannot save and prepare for their own retirements with so much money and benefits at their disposals?

· Why should a poor country prepare such lucrative packages for Presidents who are extremely rich judging from the wealth they have declared recently?

· Why can we declare age limit for ailing Parliamentarians as was correctly substantiated in a local newspaper?

· Is this President going to throw them another lifeline?

"It is unfortunate that the name of the Founding Father is being exploited by opportunists to justify their unwanted overstay, and to keep their unpopular names on the party list. The reward for the architects of these schemes comes in the form of kick-backs for the million paid for tenders or extension of their political contracts with the ruling party with the consequential extension of their service contract in the public service. If one reads the invoice of the United Africa Group hoping to profiteer N$3,7 million from State House for accommodating the Founding Father for about three years while his house was being upgraded, it is not hard to realize how the Former President’s name is being abused, although the group admitted that “the invoice was a mistake.” Oh God Cry My Beloveth Country.

Although in a different context, I fully concur with an analysis of Lt. Gen (Rtd) Denga Ndaitwa in the Confidente of 21-27 March 2019 in which he questioned the continued re-appointment of some of the ailing top civil servants “year in year out despite their poor performance simply because they wear the party scarf.’ It is in my view unconceivable that Namibians continue to slumber into a long sleep while their resources are being squandered by these permanent and irreplaceable civil servants who consider themselves untouchable and above the law.

Recently, the renovation of former President Jacob Zuma’s residential palace in South Africa led to his demise due to an active civil society and opposition leaders like Julius Malema who effectively applied their minds to the country’s legal instruments to take him to court. Today, irrespective of his good liberation credentials, he is a lonely man guilty of greed that enticed him to share his bed with the GUPTA family in a corrupt scheme aimed at state capture. Namibia has similar laws that could so be applied to demand accountability for every cent used in the renovation scheme of the Presidential residence. Where is the audited report with all the receipts to justify the expenditure, which failing to be provided, the money should be paid back just like in the case of Jacob Zuma?

The Office of Presidency or the Personal Assistant to the Founding Father are obliged to officially inform the public of the legal provision made for this extreme high entitlement. When we hear about a Director in the Office of the Presidency providing an incomplete picture about the whole saga, then it smacks of corruption. It is the right of the public to know. These high placed officials are failing to realize that the investigative media and ordinary citizens are watching these flagrances that one day will put our peace and stability to the litmus test.

The problem in Namibia is compounded by the fact that we have a weak civil society that only rely on the support of donors who are calling the shots. Not to mention the opposition parties that are confused, divided and lack vision to offer Namibians an alternative government. The opposition leaders feel that even if they personally go to Parliament on a single party ticket, they will acquire wealth for their retirement without having successfully challenged the ruling party‘s unpopular decisions. If they feel that they are stifled by the ruling party’s majority in Parliament, the courts are there to challenge them. The other option is to walk out of Parliament time and time until the majority is willing to listen. That is democracy.

The monthly pension of N$2,300 that we receive as veterans should be sufficient for everyone under the current financial difficulties. The amount of this pension is modest and morally justifiable. But this reminds me of Kazenambo-Kazenambo’s one million dollar question: “Comrade, in which battalion of PLAN did you fight?”

Finally, we hope that our aging senior civil servants go into retirement to practically experience the results of the policies and legislations they have adopted during their tenure in office. Apart from that, it is always good to vacate office while healthy to avoid retiring into a coffin without enjoying the fruits of one’s pensions and savings.

The struggle will continue….

Dr Rukee Tjingaete is a critical social and political analyst and researcher mostly applying the critical theories to examine the issues that affect Namibia. He is a media specialist holding a PH.D obtained from Michigan Sates in the USA. He is currently teaching various subjects in tourism and strategic management at IUM. This opinion is written in his own capacity.