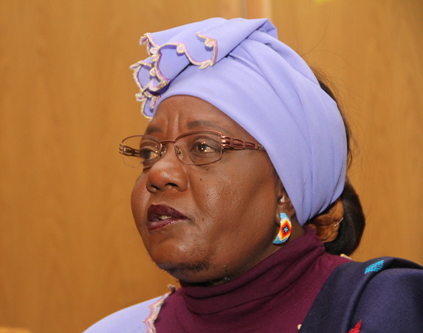 Mines and Energy minister Obeth Kandjoze has paid his last respects to the now late Kunene Governor Kazetjindire Angelika Muharukua who passed away this week.

The minister recalls his first encounter with the late Muharukua after he had been sent off on state duty by the head of State Dr. Hage Geingob to Opuuwo where she received him with the warmest welcome.

“May 2015 barely two months after the onset of profoundly game changing events of my professional career based life to that of being appointed by H E President Dr Hage G Geingob as the Minister of Mines and Energy, I set out to Opuuo, the Regional Capital of Kunene Region to start my new role as part of the Swapo Party Leaders Assigned under the chairmanship of Hon Charles Namoloh famously known as General (retired) Ho Chin Min Namoloh,”

“This felt like a send off into completely unchartered territory to a political novice like myself, at the time, but to a rude awakening and a very very sincere and an unbelievably warm welcoming experience by Cde Kazetjindire Angelika Muharukua,” reminisces the minister.

He adds: “Here for the first time I met what I call one of Namibia's rarest of rare Iron Ladies with what I term the only unlikeliest stealth personality filled passion and sincere political motivation for righteousness and justice for all, I have ever lived to experience in person from simply knowing her over the many years of being involved in the affairs of Swapo Party and Government business.”

He says the late Hon. Kazetjindire Angelika Muharukua instantly became his warmest guide and “sincere mentor in every respect of not just party politics but Government business experience and the pillar of support as he navigated the various tight curves and the long long winded and often hurdles infested corridors of politics in the region that provided much much needed light at the end of the many tunnels of Government business and national politics generally.”

“Someone so academically deficient of all the tertiary decorations and accolades that will naturally aide anyone in the course of what is definitely very treacherous political journeys, leads all of us to treasure comrade Muharukua's natural gifts and talent in her passing on, exercised simply out of the will and conviction for justice for all and greater benefit for the common good of all Namibians,” he says.

Minister Kandjoze has defined Cde Muharukua as “a beacon of solid and unwavering support and the rock I leaned on in times of doubt.”

“Thank you for who you were to me in that very short a period for having opened your home, heart and political library to guide and comfort me when called for,” “May your SOUL although your body is lifeless now, REST IN ETERNAL PEACE and YOUR STAUNCH VIEWS continue to BE A STRONG REFERENCE and LEARNING EXPERIENCE to our beautiful land and its people while your spirit premised on justice for all continue to plant the seeds of freedom together with all FREEDOM FIGHTERS WHOSE BLOOD FOREVER WATERS OUR FREEDOM,”