Shaningwa throws hat in the ring for Swapo SG 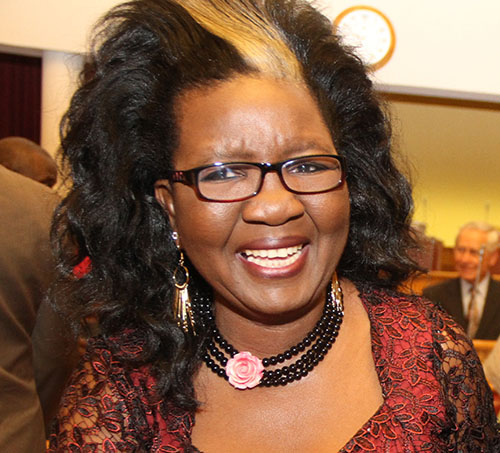 Minister of Urban and Rural Development Sophia Shaningwa has exclusively confirmed to The Villager that she will be running for the position of Swapo Party Secretary-General at the elective congress scheduled for December this year.

Shaningwa, who previously told The Villager that she would not campaign for any position on the table for the top four, said some party structures had approached her to run for the post.

When The Villager spoke to Shaningwa in May this year, she stated that she was only going to concentrate on what has been given to her and was not going to campaign for any position.

“If they want me to go wherever I will not say no, but it is not in my nature to start campaigning and telling people that I want this and that. For me it is about the job that has to be done,” Shaningwa said earlier this year.

Swapo adopted the zebra approach which means that there should be the same number of women as there are men either in Cabinet or any party structures.

Apart from the zebra format that is also known as the 50/50 gender parity. The Villager editor Linekela Halwoodi talks to Shaningwa on what she plans to do when elected and why she changed her mind.

Are you ready to run for this position, given that you last indicated that you were not interested in running for any positions?

If you are elected, what would you do differently?

It is not up to me to do things differently. The mandate will come from the congress as to what is expected of me if I succeed. That’s the mandate I will carry forward for the next five years. It is not personal it is what has been agreed upon by the congress.

The party is currently divided, should you be elected, how will you handle this problem?

I do not believe that there are factions in the party or that the party is divided. It is just individuals who are not happy about this and that, and in any household, people would never agree on everything. Maybe it is that those who are not satisfied with their ambitions are the ones making too much noise, but it doesn’t mean that there is division in the party.

The party is intact. If there was division, I would not have been approached by party structures. Maybe that division only exists in our minds but it is not on the ground.

How will you deal with issues of unhappy youth and party conflicts and expulsions?

The good thing is we are going to congress, and if that issue is highlighted at the congress, and a resolution is passed accordingly and is part of the mandate that I would have to address as the new SG then why not?

That is if there is such a thing, but currently, I do not see it. The current SG has probably already handled that matter. He is doing an excellent job on following up on these things.

The congress has not taken place yet, and currently there is nothing to talk about regarding administration.

The guidance on how things are done I will only learn as part of the mandate, and the good thing is the current SG will be there, and I am sure in his handover note he would do the right thing. It is not about me, it is about the mandate the party is giving me.

The outgoing SG said that the position requires a character who is strong at heart and should be willing to open doors to all members without favouring anyone according to their background, what is your take on this?

That is already good counselling from the current SG, and I wholeheartedly agree with him, and I subscribe to that notion.

This position is currently occupied by a man, will you bring a feministic approach to it?

I do not believe in a feministic approach to dealing with leadership a leader is just a leader. The current portfolio I am holding used to be held by a man, but to me that is irrelevant.

I just continued where the previous minister left off. It’s not about me; it's about a mandate that I will find on that desk. A mandate will not be given to a man or woman it will be given by an elected SG of the Swapo Party.

Qualified but not declaring interest

Currently, there is only one female representation in the top four by Khomas Region Governor Laura McLeod-Katjirua who holds the position as Deputy Secretary General while the position of Vice President remains vacant.

McLeod-Katjirua has expressed to The Villager that she too is not gunning for any position above her current position.

“This is too early. We follow a process in the party and that process has not allowed us to start (campaigning) left, right and centre indicating that we want to stand. I stand by the rules of the party because if I do not, I will be guilty as charged,” she told The Villager when asked if she is targeting to run for the position of Secretary-General or any other position.

Another equally qualified female candidate from Kavango West is Rosa Kunyanda-Kavara from the Ncuncuni constituency.

Kunyanda-Kavara was an advisory teacher at the regional office in Kavango west before she was elected as a councillor in Rundu.

Kunyanda-Kavara has also been a member of the Regional Executive Committee of Swapo before and after independence.